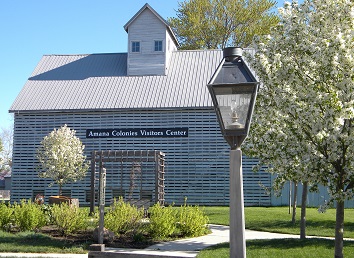 The complex of buildings that spreads out to the north is a small part of what was the village farm. Each of the seven villages had a farm department that was situated close to the edge of town. Farming was a major source of income for the communal society and many hands were required to make it work. Unlike other farms in Iowa, you won’t see any farm houses out in the fields and countryside of the Amana Colonies because here the farmers live in the villages. The whole concept of establishing seven villages instead of one large village was to be more efficient in the farming of the land. By spreading the villages throughout the 26,000 acres of Amana land each village was responsible to farm the land around their village. This saved time and effort in getting to the fields.

The buildings here were all part of the farming effort at one time but now have been repurposed into multiple uses. The Amana Visitor Center occupies a refurbished Corn Crib, the Heritage Design Needlework is located in a former granary and the former dairy barn is now home to the Festhalle which hosts weddings and the ever popular Oktoberfest.

Direction to the Next Stop: Proceed north on 46th Ave to the Church Alley on the left.